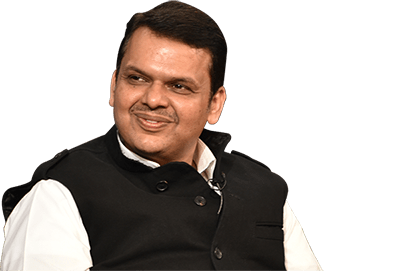 Fadnavis strongly believes that ‘Politics is an instrument for socio-economic change’ and his political career of 25 years continues to reflect the same. His capacity to work tirelessly and relentlessly comes from his mantra of ‘People First’. At every step of his socio-political journey, he has been pertinacious to see equitable progress for all.

His political career began at a very young age, in 1992. He was elected as the Councilor at Nagpur Municipal Corporation and served two consecutive terms. He has the distinction of being the second youngest Mayor in India. He has been the youngest Mayor of Nagpur and has been the only person to be reelected on the position of ‘Mayor in Council’. Also was the Mayor of Nagpur twice. There after he has been elected as the MLA – Member of Maharashtra Legislative Assembly for 5 consecutive terms. He has earned the recognition as a leader of masses.

His ability to assume multiple leadership roles is undisputable. He has ably done justice to leadership roles within the party, as a member of legislature and as an elected representative of the people of Nagpur.

On the organisational front in Bharatiya Janata Party, he rose strongly and steadily from the rank of Ward Convener to President of BJP, Maharashtra. The most recent organisational responsibilities being in charge (Prabhari) of Kerala State and Election In-charge of Kerala, Bihar & Goa 2020-21.

The campaigns for historic 2014 and 2019 Lok Sabha elections in Maharashtra were led by Fadnavis. The Maharashtra Assembly Elections and many elections for rural and urban local bodies were fought and won under his leadership, creating histories and records.

As a Member of Legislative Assembly, he is known for his spirited and intellectual debates. His understanding of fiscal issues is appreciated across party lines. He has served as a member of various Subject Committees, Standing Committees and Joint Select Committees of Legislature. He is a recipient of The Best Parliamentarian Award of Commonwealth Parliamentary Association.

As an elected representative of people of Nagpur, he was instrumental in resolving long pending and complex land ownership issues. He is known to be a fervent advocate for the cause of equitable development of Vidarbha region, for which he was felicitated with prestigious Nag Bhushan Award in 2016.

Shri Fadnavis holds the record of becoming the first Chief Minister of Maharashtra to complete a full five-year term in last 47 years and only the second one in entire history of Maharashtra.

Fadnavis’ tenure as the Chief Minister of Maharashtra was exemplary. People centric inclusive governance with knowledge driven policy making, use of technology as key enabler, dynamic approach towards development, problem solving and result oriented frameworks for project implementation were features of his transformative rule tenure.

Besides serving as the Chief Minister, he held other portfolios too, such as Home, General Administration, IT, Urban Development, Law and Judiciary, Ports, and Information & Public Relations.

Jalyukt Shivar Abhiyan, an ambitious program which aimed at making Maharashtra drought free is an example of his understanding of aspirations of people and his ability to mobilise these aspirations into the mission. The program received tremendous response from not only the farmers but from people across all walks of life. It was a unique example where a government program turned into a people’s movement. The success of the program is not only limited to creation of 6 lakh plus low cost, decentralised water structures across 22 thousand plus villages but the program also facilitated harmony in many villages, empowering people to join hands to mobilise resources and to find their own sustainable solutions.

Fadnavis’ strong inclination towards transparency and good governance was evident when he announced to enact the Right to Service Act in the very first cabinet meeting of his government. At the time, it was first of its kind legislation in the country to ensure efficient delivery of Public Services. Eventually 393 services were brought online that benefitted lakhs of people. ‘Aaple Sarkar’ too is one of a kind grievance redressal platform started by him for the ease in remedy to the common man.

Fadnavis’ inclusive leadership also involved many out-of-the-box ideas such as Chief Minister Fellowship Program. Youth in their twenties were invited to join government to bring in fresh perspective and energy in governance and policymaking.

Infrastructure projects got tremendous impetus during his tenure. His project management approach and problem-solving skills along with a War Room to monitor the implementation of key projects, ensured that the bottlenecks were removed and projects were expedited; be it Mumbai, Pune, Nagpur Metro projects, Nagpur- Mumbai Samruddhi Expressway, Coastal Road or MTHL (Mumbai Trans-Harbour Link).

Under his stewardship and persistent efforts to boost investment and industrialisation, Maharashtra had achieved the feat of attracting 50% of the total FDI inflow into the country in 2016.

Fadnavis is seen as a promising leader by investors and corporates. He successfully mobilised their support for social good. His initiatives such as Village Social Transformation Mission, SMART (creation of value chains for agricultural produces) and Sahabhag (Social Responsibility Cell) were hailed and supported by industry leaders.

Given his in-depth knowledge and unique approach towards sustainable development he was invited by several national and international agencies for his inputs on sustainable agriculture, climate change and energy security. The most prestigious of these was invitation of NITI Aayog to chair the High-Power Committee of Chief Ministers on Transformation of Agriculture.

Devendra Fadnavis’s political acumen and skills have been recognised by several forums, both nationally and internationally. He has been the recipient of many honors. He was elected as the Secretary of Global Parliamentarians Forum on Habitat for Asia region. He is the first Indian to be selected for an Honorary Doctorate by Osaka City University, Japan for his initiatives to implement major reforms for the cause of socio-economic development in Maharashtra. He has received the honor of being Singapore’s prestigious Lee Kuan Yew Exchange Fellow. USA’s Georgetown University has honored him with the Outstanding Leadership in Development Award.

Amidst the hustle bustle of his socio-political life Devendra Fadnavis, is a dutiful son to Smt. Sarita Fadnavis, a devout husband to banker and social worker Amruta Fadnavis and doting father to Divija. He is a private person who enjoys writing, reading, watching movies and web-series, cricket, listening to music in his moments of solitude.

International travel during the tenure as Chief Minister:

We use cookies on our website to give you your preferences for repeat visits. By clicking ACCEPT, you consent to the use of ALL the cookies.

This website uses cookies to improve your experience while you navigate through the website. Out of these cookies, the cookies that are categorized as necessary are stored on your browser as they are essential for the working of basic functionalities of the website. We also use third-party cookies that help us analyze and understand how you use this website. These cookies will be stored in your browser only with your consent. You also have the option to opt-out of these cookies. But opting out of some of these cookies may have an effect on your browsing experience.
Necessary Always Enabled
Necessary cookies are absolutely essential for the website to function properly. This category only includes cookies that ensures basic functionalities and security features of the website. These cookies do not store any personal information.
Non-necessary
Any cookies that may not be particularly necessary for the website to function and is used specifically to collect user personal data via analytics, ads, other embedded contents are termed as non-necessary cookies. It is mandatory to procure user consent prior to running these cookies on your website.
SAVE & ACCEPT